We left Cottonwood on Tuesday after putting the coach in storage.  I winterized it just in case we don't come back in October.  We decided a few days ago to drive instead of flying so Cindy could be home for Mother's Day.  I figured I owed her that much for putting up with me in such a confined space! for 3 months!
We hit the road about 1pm and drove to Santa Rosa, NM just east of Albuquerque.  Only 1 small incident when the winds were blowing pretty hard and a flock of tumbleweeds attacked Cindy while she was driving.  She got one and it stayed in the grille all the way home!
Wednesday we drove to Decatur, TX for the night, just north of Dallas.  We had a lunch meeting in Dallas where I ate an awesome crab patty sandwich.  Well it would have been really awesome if it would have had a bit of Zatarains....
Then we drove to Alexandria for the night.  We knew we were in Louisiana then with real green grass on the side of the road!  And rain clouds in the sky!  And HUMIDITY!  AAARGGHHHHH!
We went to Tunks Cypress Inn for dinner and I had the softshell crabs and Cindy had the shrimp enbrochettes.  Very good, seasoned well and very fresh. 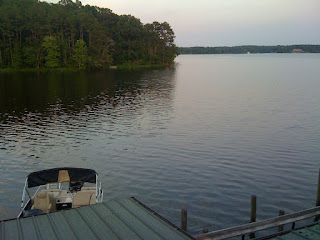 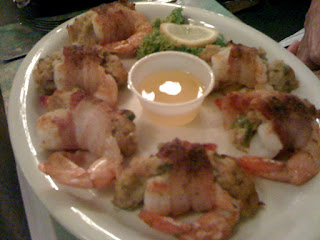 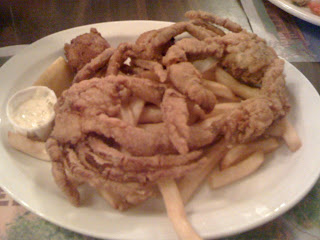 We left Friday morning a bit earlier than we planned since it was starting to rain.  Had light rain until Paincourtville where it started raining pretty heavy.  We decided to surprise Cindy's mom and visited for a bit.
Got home around 1pm, surprisingly the house looks ok.  A couple small things to fix but nothing major.  I was dreading seeing the condition of the house after 3 months.  But Scott has been checking on it and Heather has been coming by to vacuum, and Joseph (our neighbors son) has been cutting the grass.  But the pool is GREEN!  I guess my pool guy has been on vacation also.  So that'll take a few days to get it swimmable.
And we got to pick up Ella from daycare- PRICELESS!  Don't know who was more excited, us or Ella.  Took her for icecream and then came home to spend time and play lego's.
Probably won't have updates until August when we leave for 5 weeks in Europe.  Hopefully the house will sell in the meantime and we'll be homeless.
Our 3 months travelling has been totally awesome, we've seen some amazing sights and done some pretty amazing things.  Now to put in "home time" until we can head out west again.  Can't wait to see California.
Posted by folivier at 10:12 AM No comments:

After spending a great week in Mesa we headed back to Cottonwood.  Tom suggested rather than take the Interstate to take 87 north then 260 west.  Turned out to be a nice drive, still had some hard climbs since we went from 2000 ft. elevation up to 7200 ft. then a steep drop down to 3500 ft.  I spent some time talking with Tom about mountain driving and combined with having the engine and cooling system checked out and cleaned found that the coach handled the steep climbs great.  I thought the overheat warning light came on at 200 degrees then shutdown was at 205.  So when then engine would get over 195 I'd get pretty concerned and my anxiety level would shoot through the roof while I was frantically looking for a place to pull over.  Tom explained the warning is at 206 and shutdown is at 210.   So on this drive up when it got to 195 I kept my rpms above 1800 and found the temperature held steady and didn't climb higher.   Actually if I kept the rpms above 2000 the temp. started dropping a few degrees.  So my "Mountain Driving" seminar with 8V92 guru Tom worked great!
We're here at the same campground in Cottonwood and getting the coach ready to put into storage.  We'll hopefully leave around noon tomorrow driving the jeep and should make it just past Albuquerque.  Then if all goes well we hope to be home (the one without wheels) in Thibodaux on Friday or Saturday.
So we'll have been gone 3 months and we both have enjoyed our travels, we've seen some awesome sights, met some nice people, and after our Europe trip in August plan to return and continue our travels.  At least until Thanksgiving, then we'll return to the coach in the spring and head over to California and travel along the west coast northward.
Can't wait to see Ella and the rest of our family.   Some boiled crawfish would be nice, but we're not looking forward to the humidity and mosquitoes.  We haven't seen a mosquito since we got past Houston.  Well we did see one when Scott was here.  I think he snuck one in his luggage....    We've gotten pretty used to the low humidity.  Yesterday I was helping Tom work inside his coach and looked at the thermometer.  It was 95 and actually didn't feel hot at all!  I wasn't even sweating, well I was but it evaporates so quickly it cools you down.  Gonna hurt when we get home.  Hope we don't smother!  Or melt!
Posted by folivier at 8:17 PM 1 comment:

Memories of past wartimes 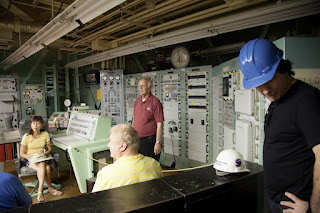 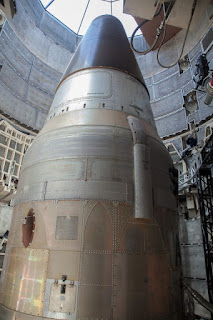 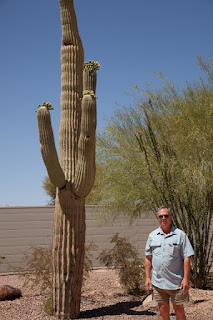 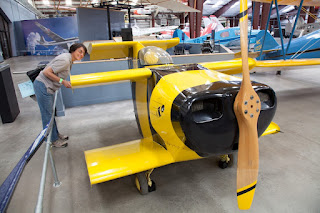 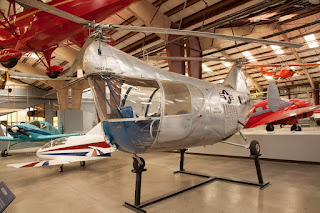 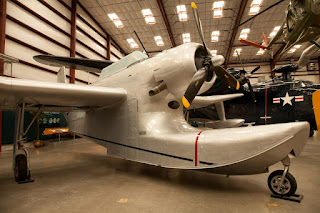 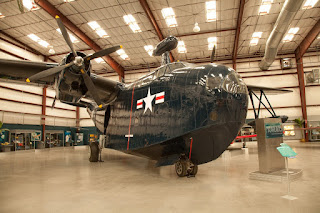 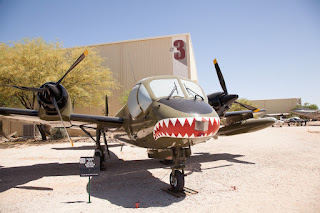 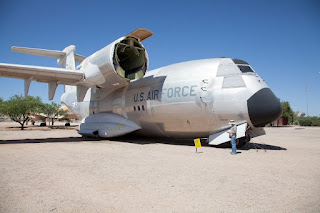 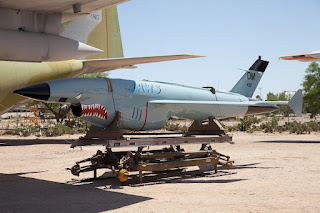 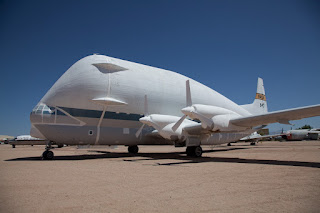 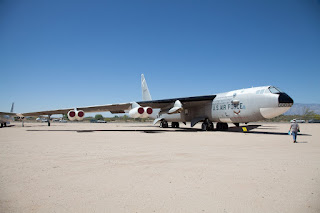 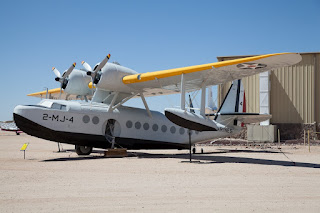 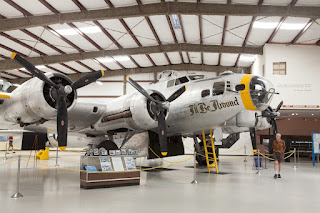 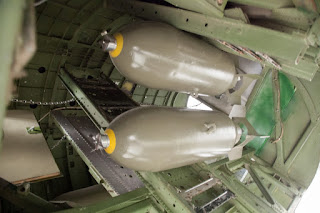 Yesterday we drove over to Tucson to see the last remaining decomissioned Titan 5 ICBM missile silo.  All of the others were destroyed due to the SALT treaties with Russia.  This was really neat, we climbed down into the control room and also down the tunnel to see the missile still sitting in the tube.
Our guide told us that a russian visited the site a few months ago and through an interpretor said he wanted his picture taken in the control room with his hand on the key.  He was a russian general in the ICBM corps and never dreamed he would have his hand on the key to destroy Russia!
Another story was a worker dropped a tool when doing maintenance and it punctured the fuel tank.  The Titan was a liquid fuel rocket and kept fueled and ready for launching at a moments notice.  The missile exploded in the tube, the explosion blew off the blast doors covering the silo and launched the warhead.  It took the air force a couple days to find the warhead.  Must have been pretty frantic!
Then we went to the Pima Air Museum.  This is where the "aircraft boneyard" is located.  We didn't go into the boneyard but did see it from a distance.  We walked around the museum area and saw single examples of each type that is in the boneyard.  A lot of unusual aircraft on display.  There was a B-17 on display in a cool hanger which had a special meaning for me since my dad was bombardier on one in the Aleutians during WW2.
Then we drove home and took Tom and Darlene out for dinner at Tom's favorite chinese restaurant.  Very good food.
Today I'll help Tom some more with his coach then go to a Cinco de Mayo party.

Monday morning we drove down to Mesa to spend time with some friends who graciously welcomed us into their home.
Wow, more steep climbs and descents 6% or more on the interstate!  Hopefully once I get the radiator cleaned it will help.
We went out to dinner with Tom & Darlene and another couple from Michigan who are also Newell owners.  We never realized when we bought our Newell coach that we were joining such a wonderful family of fellow Newellee's.  We've met some wonderful people such as Tom and Darlene whose home we're staying at this week.
I brought our coach to a bus repair facility to have some maintenance done.  Tom has used this place for years and highly recommended them.  I just took pictures of the coach up in the air and pictures of the entire underside for future reference.  Leo (service manager) found and repaired a couple oil leaks and hopefully the engine will stay clean now.  Other than these leaks everything under the coach looked good so I feel better continuing our trip.
Wednesday we cooked a gumbo for our hosts and showed Darlene how to cook cajun and left her some Bourgeois andouille so she can do another one.  I think they both enjoyed our gumbo.
Thursday Darlene took us on a tour of Mesa and to see their Mormon visitors center.  I'm impressed with the Mormon faith and happy to dispel some of the misconceptions I've had (mostly due to ignorance).  They have a cannery in Mesa and other cities where they package various items in bulk quantities for long term storage.  The cannery is staffed by volunteers (except for a couple employees who have to be certified by the USDA, etc.)  and amazingly everyone had a smile and greeting for us.  Not like a commercial run operation at all, everyone looked as if they truly wanted to be there.  They also have a "welfare system" where a member who has fallen on hard times can apply and be approved by a committee to receive various commodities.  Which a lot of religions do also but they require the recipients to give back in whatever fashion they can by volunteering.  Nice concept and one I can only dream of that our government adopts some day.  The Mormon faith is very family oriented and believes strongly in personal responsibility and volunteering and they are Christians.
Today (Friday) we're driving over to Tuscon to see the "airplane graveyard" and tour a de-commissioned ICBM silo.  That should be an interesting day for those of us who survived the cold war.
In the evenings I've been helping Tom work on his "new" coach.  He recently bought a 2002 45 foot 2 slide coach.  Beautiful coach that he is updating.  If anybody wants a Newell he has a 1990 38' coach in excellent condition he is selling. 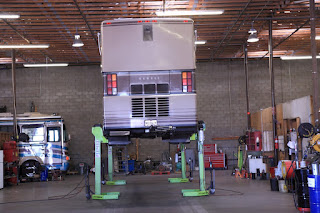 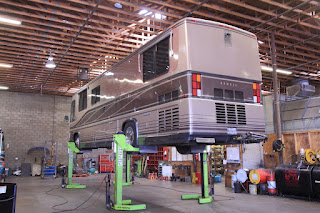