Tuesday 9/10/19
The weather Tuesday morning brought a light drizzle early and threatening skies so we decided not to leave early in the hopes the skies would clear for our drive.  We left West Glacier about 11:15 heading for Missoula.  The drive was another pretty one and the weather continued off and on with light rain and cloudy skies.  We fueled up the coach in Missoula just as we reached the I-90 then another 4 miles east on I-90 to our stop for the night.

Our Harvest Host membership includes several Breweries throughout the country and there is one is Missoula we decided to try out.  We stayed at the Big Sky Brewing Co on Trumpeter Way right off the interstate.  We had called ahead to reserve a spot and got directions on where to park.  It was an easy in and out and we were entertained by a guy parking his trailer.  He was parked when we pulled in, right on the other side of the lot from where we parked.  No sooner had we shut down our engine when we see him get in his truck and pull out of the spot he was in.  Oh well, we thought, guess he decided not to stay there.  Then he turns around and comes back.  His wife (with her dog on a leash) directs him back almost to where he was before.  He gets out, looks around and drives out again.   We see him pull up a little past an 18 wheeler and park.  Then we see him leave again.  About an hour later we walked over to the Tap Room and see he is now parked behind us.  WOW, guess he just could not decide where he wanted to be.

Wednesday
We left Missoula for our 260 mile move to Island Park, ID which will put us close to the west entrance to Yellowstone National Park.  Since it would be a mix of Interstate and US Highway driving we would both drive this day.  Forest started out to get us on to the Interstate then Cindy took over and drove a couple of hours on I-90.  We switched out again when we saw a “Chain Up Area” sign, that means some steep grades are coming, not good for Cindy.  GOOD THING we switched when we did, it was a windy, steep section that is fit for Forest.  We found a nice little Rest Stop for our lunch stop.  Arrived at Valley View RV Park in Island Park, Idaho for our 4 night stay.  It puts us just 20 minutes from the west entrance to Yellowstone National Park.

Thursday
We were up at 5am to be sure we would enter Yellowstone ahead of most of the crowd.  The drive was a little slow once we entered the park because some people like to just inch along rather than utilize the pull-outs for their sightseeing.  Our choice for our first trip into Yellowstone was to take the south loop towards Old Faithful.  We made our first stop at the Fountain Paint Pots in the Lower Geyser Basin.  There is a nice elevated boardwalk trail taking you past many bubbling boiling cauldrons.  We noticed lots of wildlife “droppings” along the way and were just commenting and wondering if we would see any animals when on our next turn there was a very large male Bison just grazing right on the side of the boardwalk.  He did not appear to be bothered at all with us.  Very glad he did not decide to run us off because I know he could run faster than either of us could! 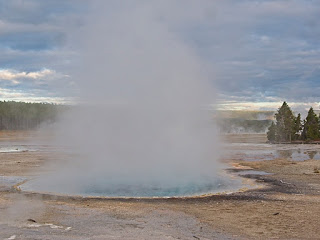 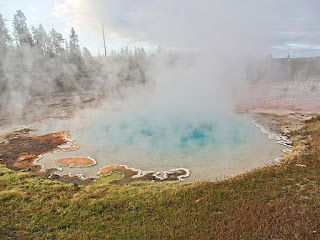 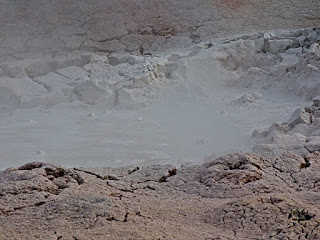 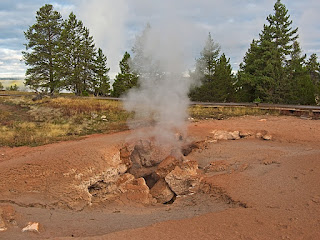 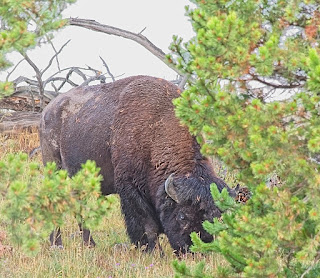 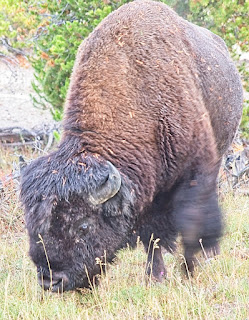 Next stop was the Grand Prismatic Spring in the Midway Geyser Basin.  Again there was ample parking at this hour and another raised boardwalk.  A lot more people at this stop but not too crowded.  The colors were very nice and it was a good hike. 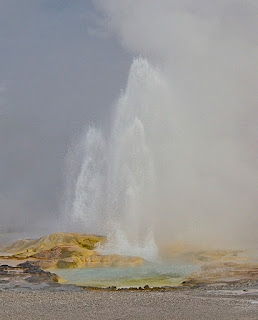 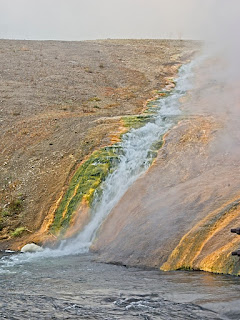 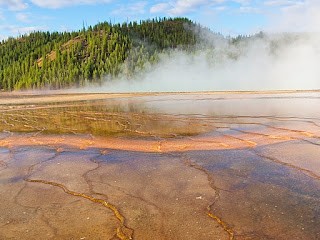 We had not really planned to stop at Old Faithful but did change our mind and glad we did.  This of course is “a must see” for all tourists, kind of the “calling card” for Yellowstone, so we expected a ton of people.  Yes, there were a lot of people but there is a very large area with several Geysers.  This particular stop has lodging, visitor center, gift shops, cafeteria, gas stations, etc.  It is a “village” for sure.  There are several parking lots and being early, we were able to get a spot in the lot closest to Old Faithful.  There are “predicted times” posted for Old Faithful and several other Geyers in this grouping, so we found the spot we wanted and waited to see Old Faithful give us her show.  The viewing area is set up with two rows of benches around the boardwalk circling the Geyser.  We set up the tripod and camera next to a youngster from Alabama, and had a nice visit with him while waiting.  When we picked out spot it was very early and there were only a couple of other people out.  By the time the “predicted eruption” arrived there were hundreds of people waiting.  Old Faithful gives her show about every 90 minutes and we were glad we decided to see it. 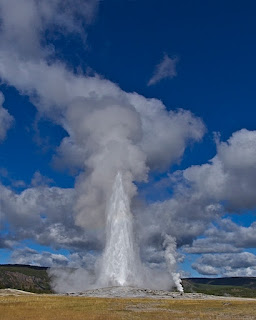 While waiting on Old Faithful we looked at the predicted eruption times for the nearby geysers.  We decided to see the Grande Geyser’s show.  The expected eruption was showing 12:45 but the “window” was from 12:00 - 1:30.  So we grabbed a snack and rested a bit inside before making our way to Grande.  The boardwalk took us past several smaller geysers, some of which were bubbling.  Looking into the ponds the water is so clear you can't tell how deep they are, they are, and are HOT! 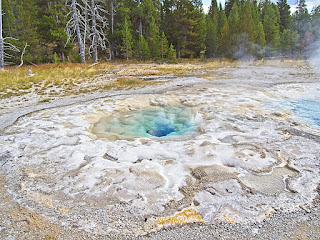 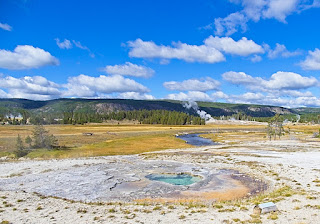 We arrived at Grande Geyser about 11 am.  There were some benches just as at Old Faithful but not nearly as many, so we were glad to get there early.  We picked out spot and before long the guy we were next to earlier to watch Old Faithful joined us.  He is a young man from Alabama, we figured in his early 20’s, traveling alone with his photography equipment.  He and Forest set up their tripods and cameras and spent the next couple of hours talking photography and travel.  It was nice to have someone sharing the same interest to visit with.  I guess they looked pretty professional because we had many many people stop to ask us when would Grande Geyser give her show.  The window of  12 - 1:30 came and went.  There was some bubbling, some steam but no show.  After waiting that long we were not leaving until we saw the Grande Geyser erupt.  Sure enough, about 1:45 the activity began.  Grande Geyser is the largest of three geysers grouped together and it is the one that will spurt the highest (about 200 feet).  When she did it was a beautiful sight to see and we had no regrets for waiting so long.  Old Faithful was nice but only shot up once.  Grande Geyser was prettier and shot up three times with the other two geysers showing also. 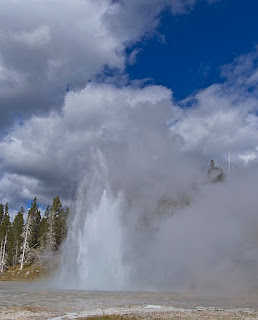 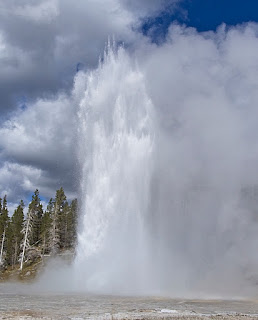 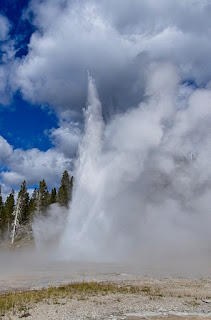 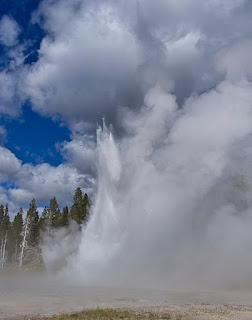 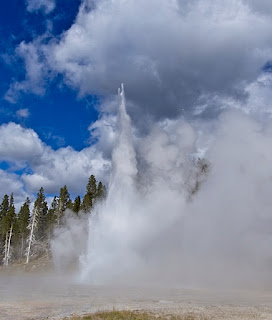 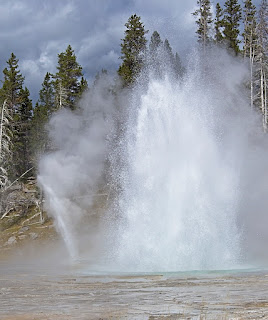 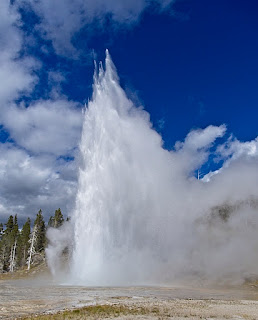 We made our way back out of the park the same way we came in rather than making the loop.  Traffic coming in had certainly increased in the time we had been there.  The areas where we had stopped coming in which had lots of parking available now were overflowing with cars and campers.  People were parked all along the sides of the road for about a quarter mile in each direction from the attracted sites.  So glad we went in early. 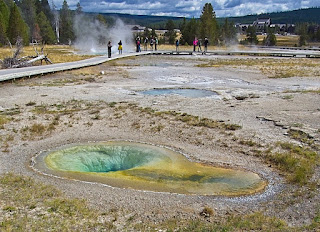 
Today will be a down day to catch up on laundry and allow our backs and knees to rest up from Thursday.  Always glad we have the luxury of time to let our old bodies recover.
Posted by folivier at 2:26 PM