We pulled into the campground on Thursday morning after 4 10 hour days of driving.  We had beautiful sunny weather for our drive but that was fixin' to change!  The wind started blowing about 15-20mph on the last 20 miles of our drive.  20mph isn't too bad unless you're driving a bus, then you get pushed around some which makes the drive pretty tiring.  We were met by Tom who guided us to our site then we had a nice short visit before he had to return to work. 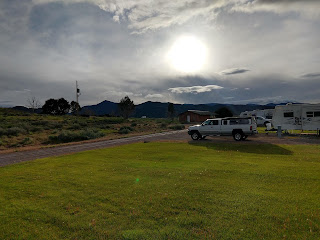 This campground is typically for the volunteers working at the Fort but we were able to stay here thanks to Tom.  The Fort is owned and maintained as a historic site by the Church of Latter Day Saints.  It was built in 1867 and like most sites fell into disrepair.  But it was purchased by the Church and restored and is really nice.  The USA flag has 37 stars which was the amount of states at the time the Fort was built.  It was a Post Office and telegraph office also.  You can see the telegraph wires on the 2nd picture below.  The mail was delivered by the Pony Express! 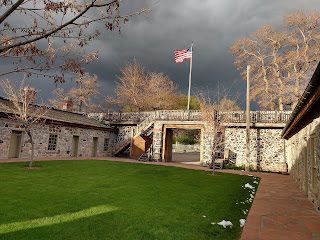 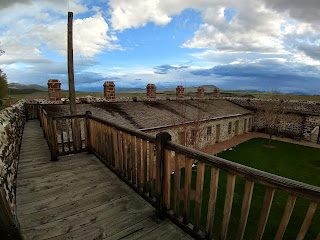 Tom and I went on a Rzr ride on Saturday which turned out to be the only day it didn't rain.  Nice day for riding but a bit cool.  We came across a geothermal plant in the mountains which was kinda neat. 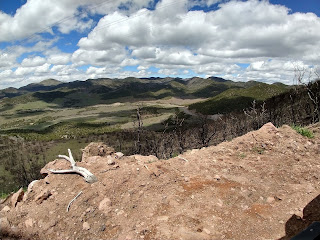 Then we drove out to Fremont State Park to tour the museum and did a short walk to see some of the easy to access petroglyphs from the Fremont Indians. 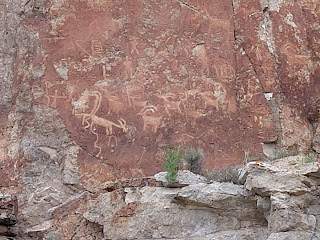 Then yesterday the snow started.  We tried to drive up to a ski lodge near Beaver but turned around as the snow started coming down pretty hard.
Then when we got back to the turn off to the Fort and campground there were quite a few 18 wheelers and cars parked along the road waiting for the snow plow to clear I-70. 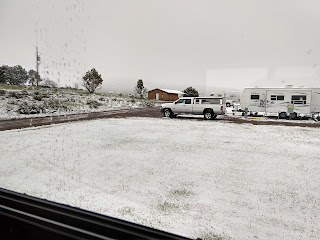 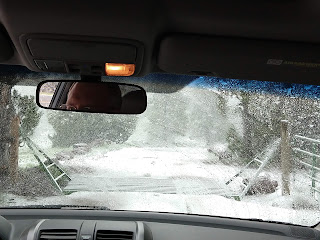 It was supposed to snow more last night but didn't so hopefully it will clear since we hope to head north again tomorrow.
Today we'll cook a chicken and andouille gumbo for our friends.  With this weather and snow it'll be good gumbo weather!  Oh, I heard it will be 95º today back home, our high temperature today will be 45º.
Once we cross into Canada I'm not sure how often we'll have internet so may not get to update the blog too often.
Until next time!
Posted by folivier at 9:42 AM