7/1
We enjoyed our time on “The Spit”, ended up staying 4 nights.  Saturday was our day to head back up to Anchorage for the night, our reservation at Mat-Su RV Park was not until Monday.  We were concerned about the smoke and construction on the Sterling Highway and the Bicycle Race on the Seward Highway.  The cyclists were traveling from Seward to Girdwood, the latter part of their route would be along our route to Anchorage.  With these concerns, we decided to leave early.  We did see dozens of cyclists along our way and they were riding single file on the shoulder as the rules dictated.  We did give a couple air horn toots to the leader.  We were glad when we reached their end spot on the Seward Highway.

We arrived at the Cabela’s in Anchorage at 11:00.   The temps were much hotter and it would be a night with no electricity sitting on hot asphalt, so we decided to move on to a campground where we could plug in.  After fueling up the coach, we continued our drive north of Anchorage to The Big Bear RV Park in Wasilla where we had an electric only site.  Ahhh, no smoke and air conditioning!

After attending Vigil Mass in Wasilla, we found a car wash to run the truck through.  Both the coach and the truck were filthy from all of the road construction and the rain we had a few days ago while traveling.  This was the first chance we had to wash the truck.  Our next stop would be Chinese for supper.  We found the first Chinese Restaurant near the carwash.  When we arrived the front door was open and upon entering found there was no A/C and no windows.  MOVING right along on to the second Chinese Restaurant….. still no A/C, but was told “that table has a fan”…..  ON to Chinese Restaurant NUMBER THREE.  Still no A/C but there were windows.  We decided to go inside, it was a nice place and maybe bearable sitting next to the open window, but the menu was not good, more sushi and “modern chinese?”.  So we left this one and decided to just go on to the deli at the grocery store, pick up food and eat at home in our A/C.  So thankful for a place to plug in.  It sounds like temperatures are about 10 degrees warmer than usual and we find it strange these restaurants do not have A/C, but we had options.  I’m sure heaters are far more important for them.

Sunday morning involved a quick run to the grocery and fill the gas tank on the truck.  We left Big Bear about 11:45 for our short drive to Mat-Su RV Park in Willow.  We had reserved Monday night and extended it to two nights with full hook ups.  We checked with them ahead of time and found we could hand wash the coach at the campground. YES, it sure needed it!  Mat-Su is a smaller park and had just a handful of guests.  But does have shade.  After getting settled in, we gave the coach a good washing.  Boy does it look better!

Monday we drove out to Talkeetna.  There is a pull over just a few miles before town where we were able to see Denali.  It was a little hazy but we could still see her.  We walked around town and in a few shops before heading back.  We had spotted a sign for BIRCH SYRUP on the way to Talkeetna and decided to stop on our way back.  The store is the Alaska Wild Harvest and they gather sap from Birch trees to make syrup.  They had quite a selection of jams, jellies, syrup, honey, candy; great stop.  Of course we had to purchase a few items and contribute to the local economy.  SWEET! 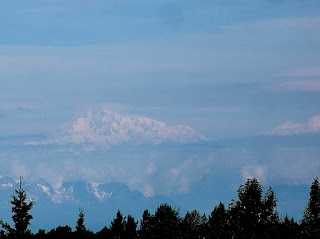 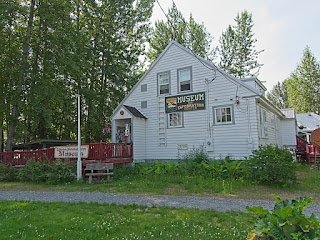 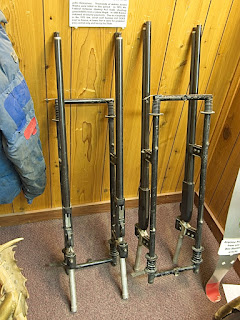 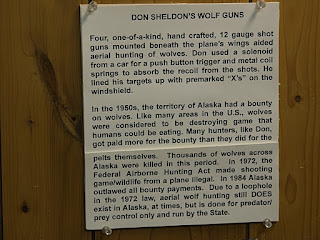 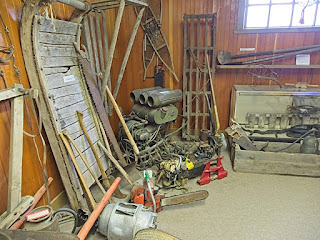 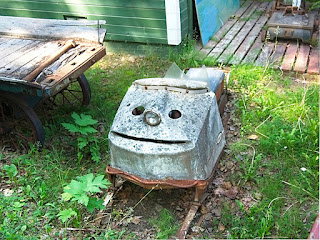 Tuesday was moving day and time to meet up with a group of travelers in the RVing to Alaska Group.  The gang will spend 3 nights at the Eklutna Lake Campground in the Chugach State Park.  Arrival time was set for 2pm or later.  So about noon we left Mat-Su RV Park for the 2 hour drive.  We were retracing our steps to the turn-off from the Glenn Highway for the state park, easy drive.  The road to the park was very narrow, steep, and NO shoulder, so this was a slow go for the last 9 miles (which took us almost a half hour).  We arrived at 1:45 with a steady stream of RVs to follow.  Everyone was directed where to park and each was a back in.  Needless to say it took quite a while to get 38 rigs parked.  We were very lucky to get a site closer to the entrance.  We had a group happy hour about 5pm next to the host site to meet everyone.  Looks like it will be a good group to spend a few days with.
Wednesday we drove down to Anchorage.  On our way down the mountain we had to stop for a black bear in the middle of the road.  He took his time crossing the road and climbing up the side of the mountain. 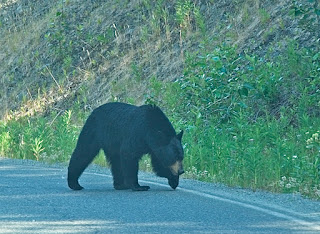 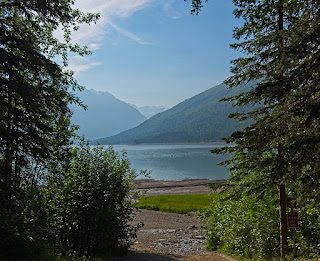 Our first stop in Anchorage was a visit to The Ulu Factory.  You are able to watch the Ulu knives as they are being made.
We also visited two museums in Anchorage.  The first was the Anchorage Museum.  It is a beautiful building and grounds but for $30 we were very disappointed with its contents.  There was one small section with a nice display but the remainder of the museum was not very interesting.  The second museum was well worth the $6 we paid, it was the Alaska Veterans Museum.  This museum is very small but packed with lots of information and displays.  I did find some information on the Aleutians Island where my dad served as a bombardier during WW2.
OH and we finally found a good Chinese lunch at Charlie’s Bakery and Chinese Food.  The food was delicious and they had A/C.  It was a nice little restaurant packed with locals.  Their little bakery was good too.  We purchased a fresh baked bread and of course dessert.  The bread was fantastic.

Thursday - Happy 4th of July!
Drove out to Thunderbird Falls trail head and hiked up to the falls.  It was a half mile hike to the the overlook and another half mile down to the bottom of the falls.  We met a couple on our way up and she told us there were steps to the bottom of the falls and the hike was well worth it.  So we decided to do the hike down to the bottom.  Well, we never did find steps along the way… but we still made it.    On our way back to the campground we decided we had earned an ice cream, so we stopped for one at Rochelle’s Ice Cream Shop on the way back up the mountain to the campground.
There is also Cheely’s General Store at the same stop.  They sell a lot of the essentials you may need when camping (including sweatshirts, which we certainly did not need) and also bags of Nome Gold!  Each bag is said to include gold which you need to pan for.  So of course we bought a bag!  We will see how much gold is in there.  Might save it so the grandkids can find gold.

Thursday night was our pot luck gathering with the group.  We cooked corn soup to contribute.  We had no idea how HOT it was going to be for the campout, should have made a cold dessert instead, oh well. There were lots of salad, BBQ meats and desserts.  It was a great meal shared by all.

We left the group campout on Friday and spent 3 nights at Big Bear to catch up on laundry, groceries and suck up some good old A/C since the high was 90, now about 15 degrees above average.  Once we were settled in at Big Bear Forest received an email from Roger that he was finished with the work on the AquaHot (which is our only source of heat and hot water while boondocking) and ready to ship it back to us.  So now the dilemma is where to ship it.  Checking around we found a UPS Store in Wasilla that would accept the delivery and hold the package for us.  So Roger shipped it out and sent us the tracking info.  Looks like delivery will be on Wednesday, July 10th.
Back in December we made our reservation to stay in the Denali National Park from July 9 - 16.  Once you enter the park and the campground you cannot leave until the end of your reservation without paying again to reenter the park.  SO, we will have to pick up the package after our stay in Denali.  The UPS Store is over 200 miles from Denali.

We had made a reservation to stay at Denali Rainbow Village RV for Monday to allow  time for us to finish any washing, dump and fill just before entering Denali National Park on Tuesday.  Our stay at TEK in the Denali National Park will be dry camping.  Over the weekend the tracking of our package showed expected delivery on Tuesday.  WHAT?  So on Monday we checked with the UPS Store to find out what time they expect to receive their packages on Tuesday.  We were told probably between 10 am and noon.  TIME TO MAKE CHANGES AGAIN.  The drive in the truck from Denali to the UPS Store would be 3 or 4 hours one way, so we decided to find a campground closer to the UPS Store for Monday night and just cancel our night at the Rainbow Village.  And that is what we did.  We stayed Monday at the Willow Creek Resort; not what I would call a resort, but they do.  We prayed, after these adjustments to our schedule, the part would arrive and be ready for pickup by noon on Tuesday and would not prevent us from entering Denali as scheduled.
Posted by folivier at 10:26 PM