7/19 Friday
Friday morning we took a drive out to see the small village of Hope.  The drive down the Hope Hwy off of the Seward Hwy follows the Six mile Creek and the Turnagain Arm taking you to Hope at the Resurrection Creek, just before it empties into the Turnagain Arm.  It was a beautiful drive on a good windy but paved road.  Hope is a small village with dirt streets and lots of old buildings and a couple of small campgrounds.  There were a couple of little restaurants, stores, gift shops, library and a museum.

The Hope - Sunrise Historical Museum was filled with memorabilia of life in Alaska and the gold mining of years gone by.  There were several buildings which had narrated information.  Under a covered area was a collection of old mining equipment.  Very nice collection in this small town. 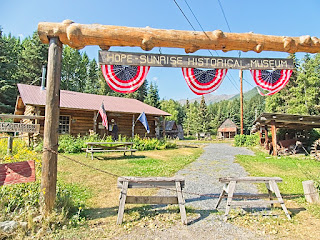 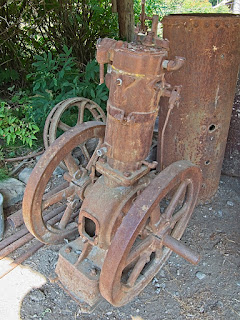 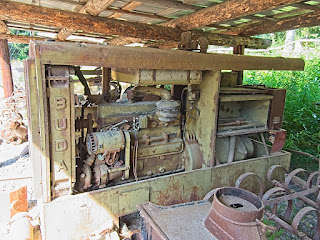 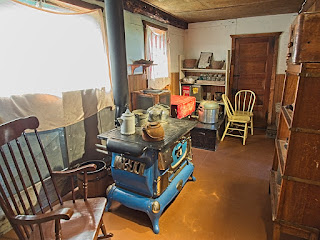 The Resurrection Creek empties into Turnagain Arm at Hope.  The road in this little old town ends at the creek which is a great fishing spot.  We watched several people fishing right in and on the edge of the creek, and they were catching. 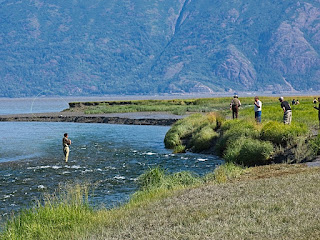 It was a nice side trip with more beautiful Alaska landscape.

We returned to Girdwood and after a quick lunch, hooked up the truck and rolled on down the Seward Hwy to the Sterling Hwy taking us to Soldotna where we pulled in at the Fred Meyers for a grocery stop.  The last time we passed thru and stopped at Fred Meyers we easily found a place to park, this time the parking lot was packed.  This is peak fishing season on the Kenai which runs through town.  We slipped into a spot just the size we needed.  We loaded the fridge and pantry and even found room in the freezer for unlicked ice cream (had not been able to buy ice cream in a long time).  Then we squeezed back out of the parking lot and back onto the Sterling moving south to Ninilchik.

Ninilchik is another little fishing village along Turnagain Arm.  We found All Seasons Campground there which is a Passport America Campground.  GREAT!  Dry camping in a state park typically costs about $15-20 per night, with our Passport America discount we pay $21 per night for a full-hookup site.  What a bargain!  The campground is only 3 miles from the highway, not a bad location and we like the smaller campgrounds.  We will stay a few days and make this our home base.

Saturday
After checking with the campground host Saturday morning, Forest washed the dust off of the coach while Cindy caught up on laundry.  After lunch we took a ride out to the small boat harbor to see if there were any eagles to be found.  The timing was not right,  we were after low tide so none were feeding.  Someone told us the best time to see the eagles here is at High Tide which would be about 7pm.  We will come back later. 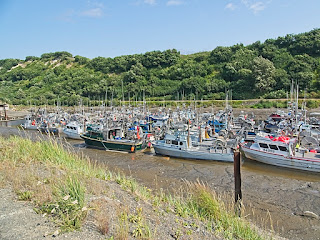 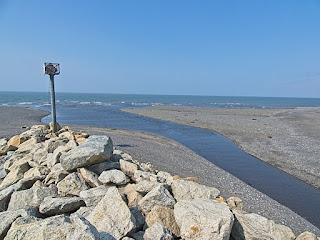 We turned down another little road taking us into Ninilchik Village where we found Mission Ave Gallery & Gifts.  The owner, Jim Lee is a local artist who does fossil Ivory carvings.  His little shop is filled with carvings, jewelry and Moose Antlers all made by him and other local artists.  We will be back to purchase a special piece to take home.  His work is some of the nicest we have found on our trip.

We found the St. Peter Catholic Church in Ninilchik which has a Saturday Vigil Mass at 8:00 pm!  We found this to be such an odd time but when you remember the sun does not set until almost mid-night it is not unusual for this area.  We had a snack in the afternoon to hold us until after Mass for supper.

After Mass we visited with a local couple who asked where we were from.  He is a Viet Nam Vet and has a couple of good friends from Lafayette and Abbeville.  We had a nice visit with Mark & Liz.  When we left the church after mass we drove back down to the small boat harbor to see if the eagles were feeding.  There were 6 or 7 eagles and several sea gulls.  The local charter boats dump their fish carcasses on the beach. 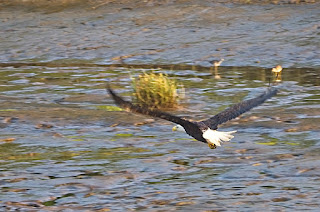 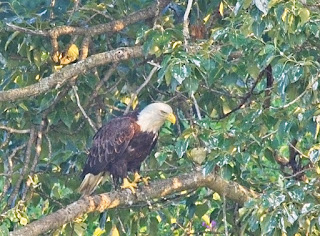 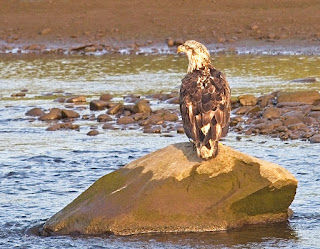 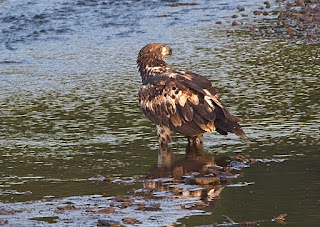 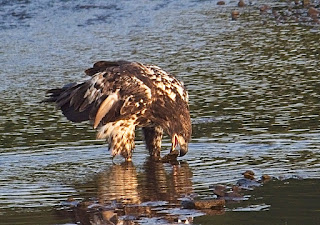 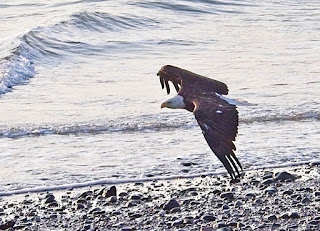 As we were leaving the harbor we met Liz and Mark, the couple from church, driving in.  He rolled down his window and they invited us to come to see their house.  WOW, we said yes and followed them home.  They have a beautiful log cabin and property along Deep Creek.  She is very proud of her garden and beautiful flowers.  They have been living in their log cabin for many years where they raised their three sons.  He is originally from Illinois and she is Native Alaskan.  We enjoyed our visit with them.  When we realized it was 11pm it was time to go.  Hey we still made it home before dark!  Had a quick ham sandwich before we went to bed.  What a nice day.