8/17 Saturday
After our trip up the Dalton highway to the Arctic circle, we planned a “down day” for Saturday.  Mid morning we changed our minds and decided to take the “Gold Dredge 8” tour in the afternoon.  The tour began with a presentation on the Trans Alaska Pipeline.  Our time here in Alaska has taken us up and down the pipeline from Valdez to Galbraith Lake on the Dalton Highway (just 140 miles from Deadhorse).  For someone flying in to Fairbanks and taking this tour, I am sure it was very impressive to see.  For us, who have seen mile after mile after mile of the pipeline, not too impressive.  Besides after spending my career on pipelines, not interested!
Next was a ride on a narrow gauge train up to the Gold Dredge 8 which took us past some of the equipment used in the gold dredging industry.  The ride included an explanation of the equipment and how it was used.  The end of the line took us to our chance to “pan for gold”.  Everyone was given a poke filled with pay dirt and guided on how to pan.  We did not walk away rich but did bring home another taste of gold.
We then had time to explore the Gold Dredge 8 which is a retired dredge.  It was very interesting.  Over time over 3.5 million ounces of gold were recovered by dredges in Alaska. 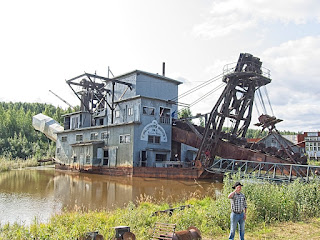 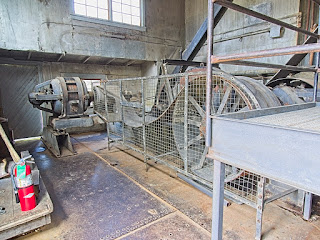 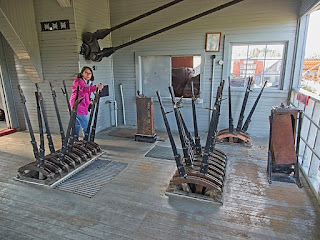 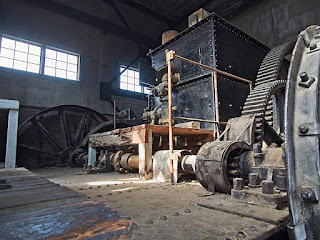 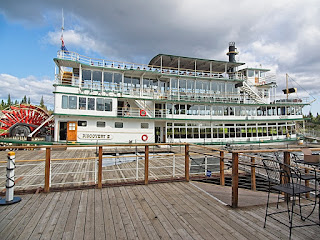 Sunday
We took a river cruise on the Riverboat Discovery III on the Chena River.  The cruise took us past the Trail Breaker Kennel where we saw a few young pups beginning their training to one day be a part of a dog mushing team.  We were told how they are trained and watched a team of dogs harnessed to pull.  The dogs are so excited and ready to work when they are given the voice commands.  This kennel was established by the late Susan Butcher.  She was a 4 time Iditarod Champion (1986, 1987, 1988 and 1990).  In 1979 she, along with four others, made the first dog-sled ascent of Denali.  Her husband, Dave, still runs the kennel. 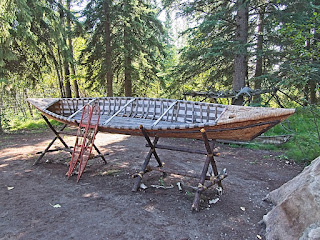 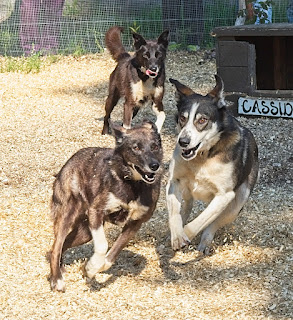 Further down the cruise we came to the  Athabascan Indian Village.  We all got off the boat and were able to walk around the village to see the exhibits and learn a little about the Athabascan way of life.  There was a fish wheel in operation and a demonstration on how the fish are cleaned and readied for smoking.  A little about the different Salmon and which are more desirable for human consumption and which are prepared for the dogs.  Sled dogs are very important and are very well cared for.  We saw typical cabins and camps set up for the hunters.  There was an exhibit showing the pelts of different animals and we were told the specific uses for each and why.
We also saw a bush pilot take off and land in the Chena River just ahead of out boat.
It was a nice 3 hour trip on the Discovery III.
Monday we visited the Fountainhead Antique Auto Museum - 95 pre-World War I &II automobiles, horseless carriages, steamers, electric cars, speedsters, cyclers, midget racers and 30’s classics.  I was amazed at the technology that was invented back then that we are only now seeing.  Hybrid cars, automatic transmissions, 40-80 mpg’s! 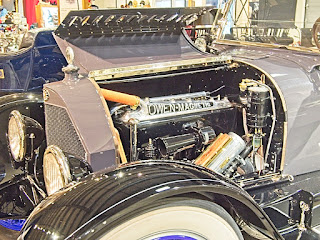 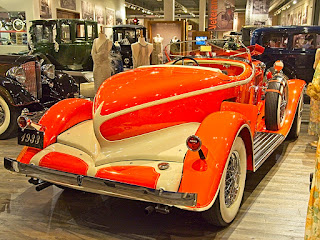 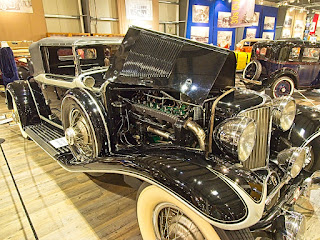 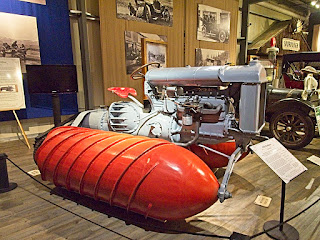 Cindy enjoyed the vintage Fashion collection of clothing from the 18th to the mid-20th centuries.  Alongside the automobiles are beautifully preserved and staged men’s and women’s outfits and accessories to match the auto’s place in time.  They even let me drive one!  but would only let Cindy ride…. 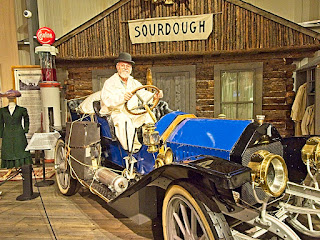 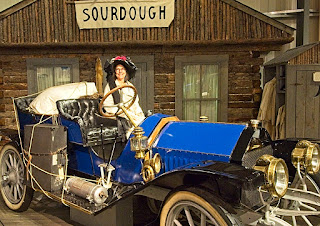 Wednesday
Moving day started out with rain but cleared and we were ready to leave by 10am.  Looked to be a good drive but quickly got in to rain again.  We pulled over to let the rain pass then continued on and had to pull over again for more rain.  Finally made it to Delta Junction where we stopped at the Delta Meat & Sausage.  We had to pick up some Yak and Reindeer steaks, sausage and slab bacon.  Then it was back on the road with our next stop in Tok to fuel up the coach.  Our final stretch of the day took us up the Alaska 5/Taylor Hwy which would take us to Chicken.  Since we got a late start and a couple of pull overs for rain, we decided to stop for the night at one of the pull-outs.  It was a quiet stop with panoramic views of the mountains and valleys in every direction.  Good end of the day.  With clear skies and no towns nearby it would be a good chance to see the Northern Lights.  Forest was up before 1am with his camera shooting pictures of the night sky.  Guess what?  He did get a view of the lights! 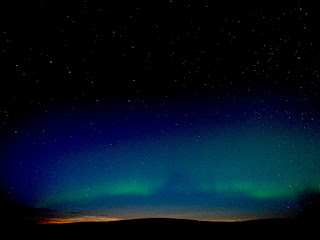 Thursday
When we first entered Alaska in June we spent a couple of nights in Tok and drove the truck up to Chicken one day.  The Taylor Highway which will bring us to Chicken is a part of the Klondike Loop which we will be traveling in the coach.  The Taylor continues past Chicken but the pavement does not.  From Chicken to the Jack Wade Junction the road was a narrow dirt road with hair pin turns for about 30 miles called the Goat trail.  Then another 30 mile section called the Boundary Road which took us to the US/Canadian Border.  This was not a bad section.  The next part of the Klondike Loop is the Top of the World Highway which is Yukon Highway 9.  The road surface was much better than the section out of Chicken!  The views were even better!  We followed the TOW Highway all the way to the Yukon River. 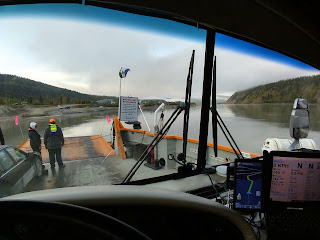 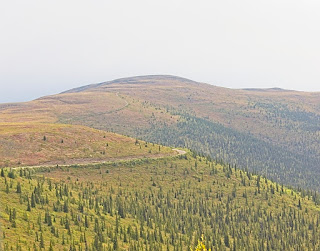 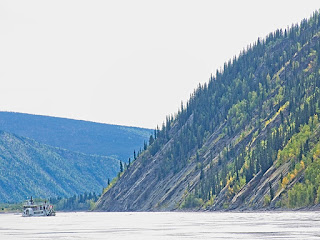 Our stop for the night was just before the ferry which will take us in to Dawson City.  We will spend a couple of nights at the Yukon River Government Campground and use the ferry to visit Dawson City before continuing on down the Klondike Loop.