Sunday 8/25/19
Since we decided to spend two nights at Fox Lake Campground we opted to take a drive out in the truck.  We stopped in Carmacks for lunch and found a good burger at the Carmacks Hotel Restaurant.  We enjoyed a serving of poutine in place of the fries.  If you have never been to Canada you may not know what “poutine” is.  Well it is french fries topped with cheese curds and gravy, and it is very good, similar to fries with debris. 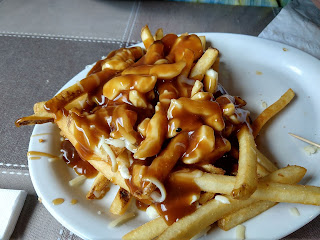 After lunch we drove another 15 miles to the Five Fingers Rapids Recreation Site.  “Five Fingers Rapids” was named by early miners for the 5 channels, or fingers, formed by the rock pillars in the Yukon River.  The riverboats would have to be winched up since the water was frequently a 1-2’ rise.  They are a navigational hazard.  Looking down at the Yukon River the site is a nice overlook with information boards and 219 stairs down to a 0.6 mile trail leading down to a closer view of the rapids.  Well we climbed down those stairs and walked the path and back and UP those stairs!  These old knees and legs were feeling it, but we made it.  On our way back home we stopped to fill the gas tank and treat ourselves to a $7 pint of chocolate ice cream (we did share it), our reward for all those stairs. 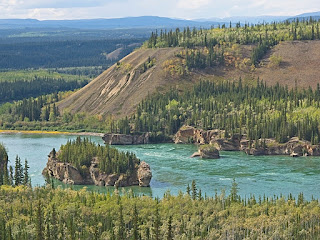 It was a nice drive and a relaxing day.  Monday we will complete the Klondike Loop and return to the Alaska Highway taking us further east and then south onto the Cassier Highway.  Another new route to follow.

Monday
Our drive from Fox Lake Campground to our fuel stop in Whitehorse was a smooth one.  We knew we would need fuel before leaving Canada so opted to fill up before heading down the Cassier Highway, Hwy 37.  Cindy drove from Whitehorse for a few hours and we switched back before reaching the Cassier.  We knew the first 20 miles of the Cassier Highway would not be a good road but were told past that point would be a good paved two lane road.  Our plans were to spend the night at Boya Lake Campground and continue the next day to Stewart.  After recalculating our miles we decided to pass Boya Lake and go a bit further since it was early in the day.  As it turned out, the Cassier Highway was not what we would call a GOOD paved two lane highway.  It was in fact quite narrow with no center line and NO shoulder.  It was not smooth and had quite a bit of poor surface and curves.  NOT a good road.  We stopped in Jade City to visit their store which carries all sorts of Jade carvings and Jade jewelry.  The Jade is mined there.  Some is shipped world wide and some is carved or made into jewelry right there in Jade City.  They offer free overnight parking and we considered staying but it was still early so onward we continued.  The weather was cloudy and we had drizzle on and off, the road was wet and there were no lines or markers on the road.  We finally decided we had gone far enough and found a decent pull-over for the night at the Eastman Creek rest stop.  It was nice and dark with little traffic, we slept well. 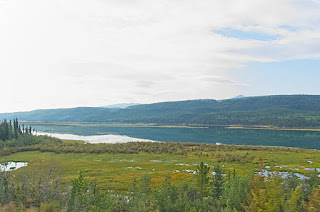 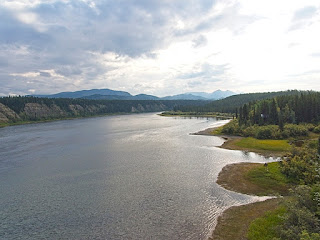 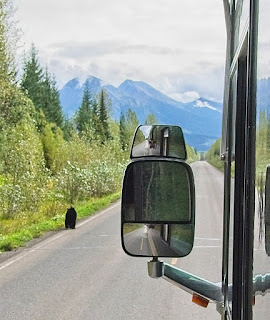 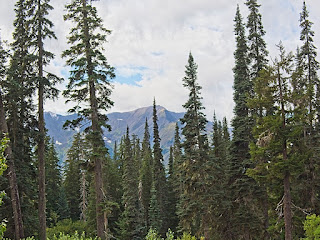 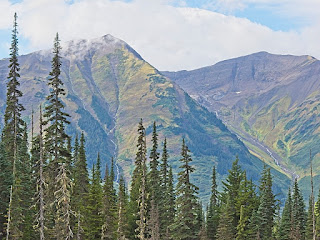 Tuesday
We continued our drive down the Cassier, still looking for the GOOD two lane road.  Just more boring scenery!  After lunch Cindy wanted to help out with the drive, the road had improved a little, so she took over.  Well that lasted all of about 10 miles and her help was done for the day, good intentions but no real help this time.  One hundred eighteen miles took us to the turnoff for Stewart, B.C. on Hwy 37-A.  Well the surface for Hwy 37-A was a much wished for improvement over Hwy 37.  This drive took us thru the Bear Creek Canyon and into the Coast Range mountains.  About 15 miles down we reached the terminus of Bear Glacier.  The volume of water rushing from the glacier was stunning.  It was a beautiful drive through the canyon with waterfalls and rushing creeks all along the way.  We arrived at the Bear River RV Park in Stewart late afternoon and were plugged in and ready to rest from the last two days drive down the Cassier.  We will use this location as our base to visit Stewart and Hyder, Alaska (only 4 miles down the road). 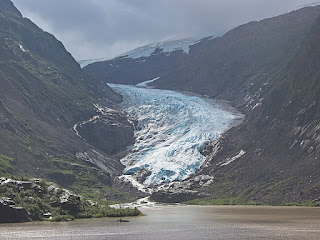 Wednesday
We drove through Stewart to the Canada-U.S. Border and on into Hyder, Alaska.  The border crossing back into the good ol’ USofA is unmanned!  Nothing, not a wall, not a guard post, nothing!  There is a Canadian border guard.  Just about 4 miles past the border is the Fish Creek Wildlife Observation Area.  It has a raised boardwalk along the Fish Creek and Marx Creek where you can observe the Salmon spawning in the shallow waters.  Of course the real reason for going here is to see the Black and Grizzly bears feeding on the Salmon.  There has been over a week of rain in the area and the rivers were high and the waters were muddy, so the Salmon were not coming in.  Things are improving and more Salmon are coming.  There was one Black bear spotted early this morning so we patiently waited in hopes of seeing more bear as the morning went on.  Without seeing any, we finally left to grab a bite of lunch.  We met up with a few people at the most popular lunch spot in town, THE BUS.  It had been highly recommended by many and we were advised that service is slow, so we planned to be there early.  We arrived about 11:40 and YES, it was a bus.  An old school bus, gutted and converted into a diner with outdoor seating (seats were the seats from the bus) and a separate indoor seating area.  All of the cooking is done by Diane in the bus and the fish she cooks is freshly caught by her husband.  So the fish of the day is whatever he caught.  Today was a choice of Halibut or Salmon.  It comes fried, grilled or sautéed and is served with french fries.  We opted for Halibut, one grilled and the other sautéed.  Both were very good.  After enjoying our fresh Halibut and visiting with the other diners, we drove around town and found a little gift shop to visit.  Who knew, they also had fresh FUDGE.  We just love fudge!  We also drove out to a boat launch and were able to spot a seal swimming out in the channel.  Now time to return to the bear viewing boardwalk.  One of the girls we had seen earlier at the boardwalk was there, don’t know if she left and came back like we did or if she just had not left yet.  She told us there was a black bear that came out and caught a salmon but took it back into the brush and another one further down that was eating berries.  Go figure, they came out while we were having lunch.  We hung around for about an hour and called it a day.  We will go back out tomorrow to see if we get lucky. 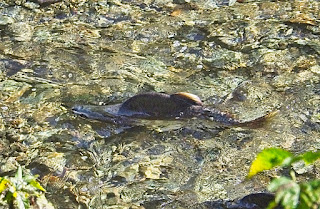 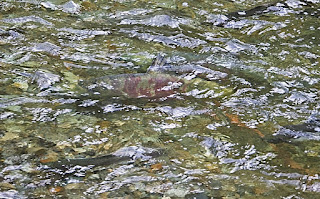 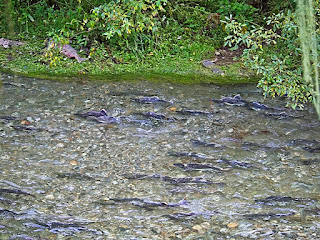 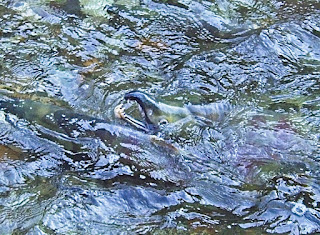 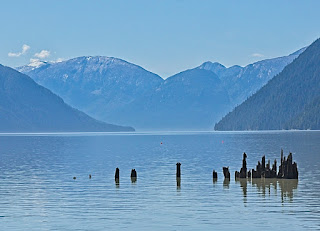