Where are all the bears?

Friday
Woke to a nice peek at the mountains across Cook Inlet.  They had been covered for the last three days.  Took a couple of strolls on the beach today.  Just amazing to see the tides go in and out, nothing like at home.  Winds have been pretty strong the past couple of days and the waves on the incoming tides are pretty to watch.  Took care of laundry today.  Rewarded with ice cream from Ninilchik General Store, today we split one. 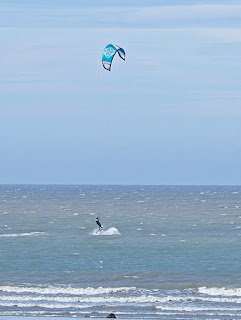 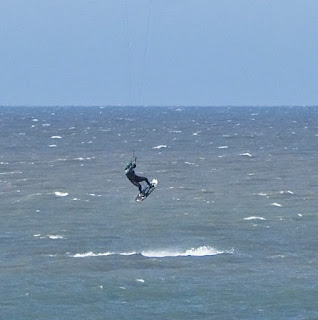 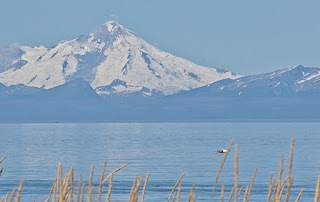 Monday
Bear Flight with Bearfoot Tours out of Homer AK.  We were waiting for Mark at the airport when he arrived and loaded up on his plane taxiing down the runway in no time.  It was a nice clear day to make our flight over the Cook Inlet to Lake Clark National Park where we would be looking for bear.  We landed on the beach and  and before long the other two planes there were leaving allowing us to have the area to ourselves.  We walked from the beach along a tree line looking for bears in the meadow.  There were several bear tracks in the sand and in the muddy areas.  Some of the paw prints were quite large.  We followed the tree line a safe distance away and made our way back to the beach without seeing any bears.  We had a seat and waited for the bears to make their way out of the trees where we figured they were enjoying the cool shade.

The tide was out and Mark spotted a couple of bears quite a ways down the beach digging for clams.  He was sure as the tide moved in so would the bears, so he kept an eye for their movement.  Time for us to have a snack while waiting.  After no bear movement we made our way further up the beach near the river. We found another old weather worn tree trunk to sit on while waiting for the bears to move into view.  How lucky to have Mark all to ourselves on this trip.  He is an interesting guy and we visited with him as we continually scanned the area for any sign of a bear.  We made our way back around the tree line again, still no bears.  We spent about three hours on the beach looking for bears and enjoying the perfect weather and beautiful scenery.  And watching the tide come in.  This beach is used by the bush pilots to land their planes for these bear watching adventures but it is a beach and time on the beach is limited by the tides.  The time came for us to fly out before the tide limited the width of beach too much. 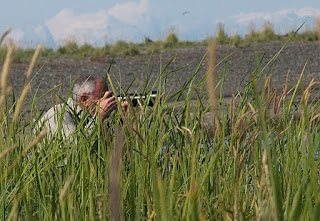 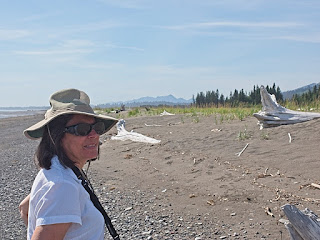 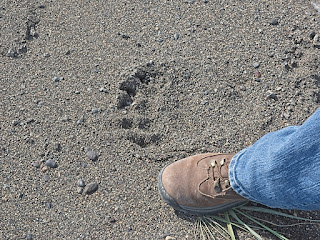 Our flight back was a good one.  Mark even asked Forest if he wanted to take the wheel for a while.  OF COURSE!  So to top off the relaxing day on the beach, Forest was able to FLY us back part of the way.  What a thrill!  Of course Mark took over before we reached land again but flying the plane was still an exciting experience. 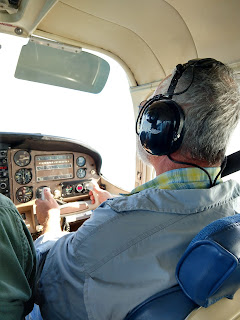 On our way back from the airport we stopped at Kannery Grill in Homer for dinner.  We noticed a “Cajun” dish on the menu as well as one with Jambalaya so we had to ask if the Chef or Owner were from Louisiana.  The waitress looked at us kind of funny and said NO the were from Anchorage.  Oh well, we will try the “Cajun” out of curiosity.  Although the “Cajun Halibut & Shrimp” was not what we would have called Cajun, it and the “Seared Alaskan Halibut” were both very good.  Rather than dessert we opted for ice cream back in Ninilchik to end our dining experience.