Not so long ago we moved out of the house since we finally got a sale.  After spending a couple months in our 1993 39 foot Newell and a lot of discussion between Cindy and I, and also speaking with a lot of friends who are either fulltiming or just take long trips, we decided to buy another Newell.  We looked at a few but none really struck us as the right one.  I had seen a 1998 2 slide 45' Newell on the internet at Motorhomes of Texas in Nacogdoches, TX.  And since it was only 3 hours from Calhoun where we spent a few days visiting Steve and his 1997 single slide Newell, we decided to drive over and look at it.  Well the pictures weren't as nice as the coach in person, usually it is the other way.  After spending two days going through it, driving it, just sitting in it and going through our daily routines we sat down and negotiated a deal with our '93 in trade.

So we spent the first night in our new coach!  It's so much nicer and SO much larger.  Two slides make a huge difference, plus this one is 6 feet longer.  It even has a memory foam mattress so we both slept much better.  And it has a ceiling fan over the bed so I really enjoyed that!  It has a full size Amana refrigerator and a walk-in closet in the back.  The dealership wanted us to spend the weekend locally so they can take care of any problems that we may find.  So we decided to park in their lot with the old coach next to us making it much easier to move all of our stuff and take time to get everything situated like we want.  We plan to leave here Monday late morning unless there are some things to get fixed. 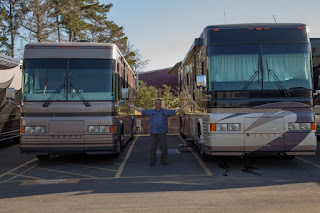 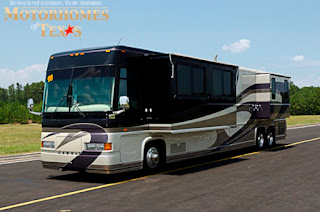 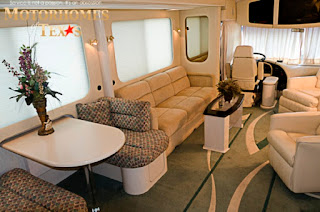 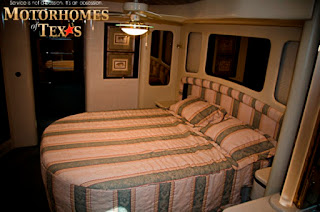 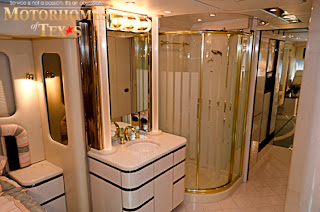