Steve took us around Monroe for a little sightseeing.  First we went to the Biedenharn Museum.  They were the first bottlers of Coca Cola.  Pretty nice museum, learned a lot about Coke.  One of the most fascinating things is that Coca Cola ships plastic blanks for their 2 liter and smaller bottles across the world.  I would have thought they would be made locally but the blanks look like a test tube with a bottle cap.  At the different locations they are blown into bottles using hot air and molds.  Pretty neat.
Then we walked next door to visit the Biedenharn's home.  Very impressive and modern for a home built in 1916.  The garden was patterned after an English estate garden and very nice.  The plants and flowers were very colorful, especially the tulips.
Then yesterday we went to the airport to visit the "Flying Tigers" museum.  This was where Claire Chennault set up a navigation school which the Army Air Corps used to train all of their navigators.
My dad was a navigator/bombardier so he probably came through here to train.
Today we're watching the rain but it looks like it is almost over.
Tomorrow is moving day, we've enjoyed our "courtesy parking" here at Steve's. 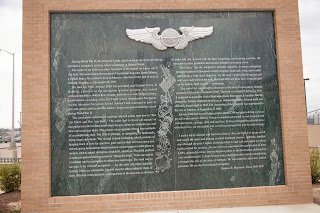