After picking up the coach in Hudson, CO we drove to Custer, SD followed by new friends: Rudy & Carol and Chappell & Mary.  We met Rudy and Carol when we bought the coach back in March.  It was nice to have a couple of friends to travel with.
We spent a couple days in Custer with Rudy and Carol, Chappell and Mary decided to drive up to Spearfish since they had already seen the area.  One day we drove out to Mount Rushmore which should be on everyone's bucket list.  Truly amazing and such a testament to what can be done in our country.  After all how many countries have carved a mountain to put some of their most influential leaders?

The rally turned out to exceed everyone's expectations.  There were about 30 couples with their coaches there, a few had their kids.  Mostly Newells but a few Foretravels, a Prevost, a Bluebird, and a Class B.  The days were filled with technical discussions and helping each other with repairs or upgrades to their coaches.  Of course we also rode RZR's through the mountains.  One day we ended up in Deadwood and rode back on the highway.  No license? No problem!
We had 3 potluck suppers and Cindy cooked a chicken and andouille gumbo the first night, a bread pudding with rum sauce (I added the rum!) and then key lime pies the last night.  All 3 were a big hit and of course all of the other dishes were just delicious.  We re-acquainted with some friends we hadn't seen since we  first bought the old Newell and made new friends.  Some of whom we plan to visit or travel with this year and the next few years.  A truly wonderful group of people.  The Newell factory sent their VP over service John Clarke with a gorgeous 2007 Newell to attend the rally and give a couple technical talks.  And of course to give each of us a few really nice gifts.

One day we rode an old steam engine train from Hill City to Keystone with Jeff and Lynn.  Nice ride through the country.  Then drove back through Sturgis.  Nice small town and very quiet, for now. 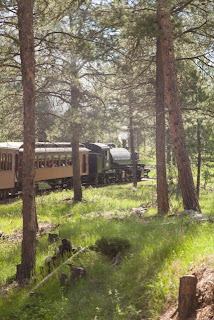 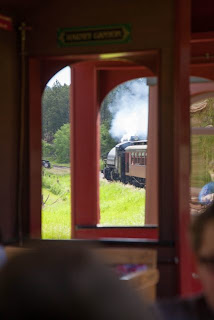 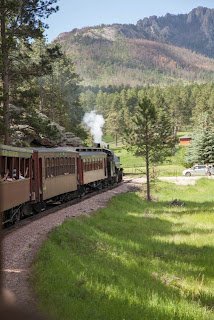 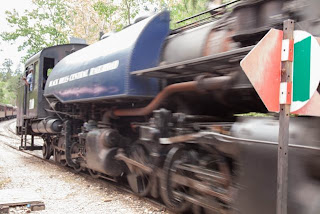 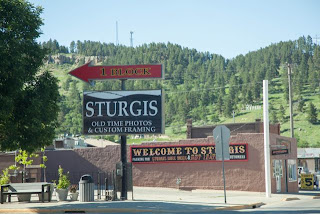 We left Spearfish and took a 70 mile detour down a local highway through the most amazing and beautiful scenery I've ever seen.  It was like Moab with the grass and trees.  The contrast along and through the canyons between the red rocks and green grass and tress was just gorgeous.  We turned around at the entrance to Devils Tower and continued on to Sheridan, WY 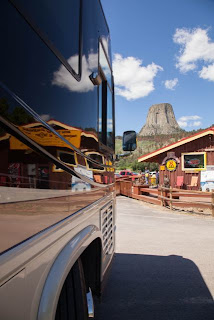 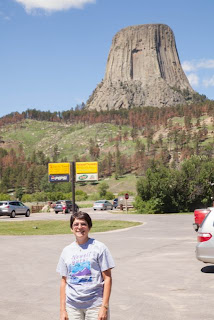 Well after a wonderful week in Spearfish at the Newell rally we're on the road to Cochrane, Alberta, Canada!Then we left following our good friends Clarke & Elaine and Tom & Darlene and finally arrived to Lethbridge, Alberta today to spend the night before driving to Cochrane where we will spend a week along the Bow River.  Yes, that's the same river that flooded Calgary a week ago.  In fact the campground in Lethbridge is along a river that flooded last week.  There was over a foot in the office.
The last two nights we've been enjoying a late dinner with our friends outside after the afternoon heat dissipated.  Tonight everyone has begged Cindy to cook another bread pudding.  So she's slaving away in the kitchen.  But I think we'll eat inside tonight since it's pretty darn hot outside.  It's about 100 and everyone is complaining about the humidity, it must be at least 40%, HA!  That's a nice day back home.

Yesterday was a great drive.  The temperature never got above 74 all day so we drove with the windows open.  The scenery was gorgeous as we drove through fields of bright yellow canola.  Then we got into the hills which were curvy roads and more wonderful scenery.  We finally arrived in Cochrane and pulled into the campground for a week.  Finally we can relax and enjoy not driving.
So far it has been a wonderful trip. 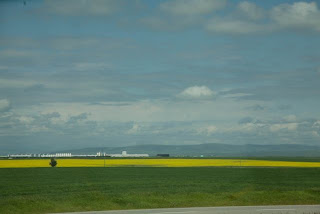 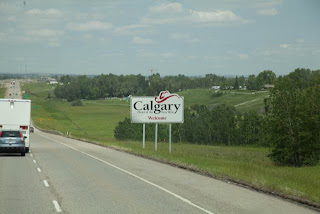 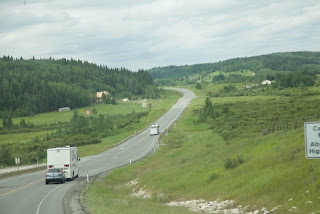