6/18
Tuesday we took a drive back up the Richardson Highway to see a few things we passed coming down to Valdez.  First stop was the Horsetail Falls which is located on the west side of the highway.  There is a very nice, long paved pull out right in front of the falls.  After a few pictures we visited for a bit with a gentleman traveling in a motorhome from Florida.  He actually lives in Maine in the summer and Florida in the winter.  He was traveling alone and shared how difficult that can be with no co-pilot.  Very glad we have each other on this trip as always. 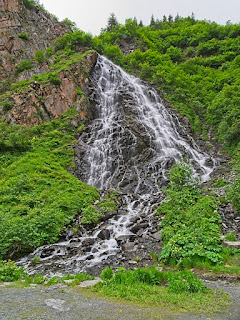 Next stop was the Bridal Veil Falls just a half mile up the highway on the east side.  The pull out for this one was across the highway, but still a nice long paved one.  Problem here is some people are not satisfied to look across the road from a safe spot.  We had to anticipate when people would walk right out in front of our vehicle to cross the road (with no shoulder) and stand between the guard rail and the white line on the side of the road (about 12 inches) to snap a picture of the water fall and then cross back over to the paved pull out.  Makes driving just a bit more challenging since it is in a blind curve. 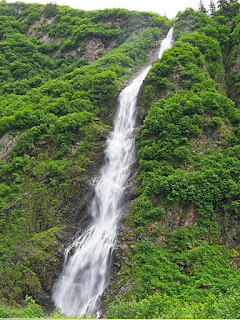 Next stop just another 15 miles up the highway was the Worthington Glacier State Recreation Site.  It is a very nice stop to view the glacier with information boards about glaciers, viewing telescopes, benches and an overlook platform.  The Worthington Glacier is on Girls Mountain (elev. 6,134 feet).  There was a sign that said the path to the glacier is not maintained, dangerous, slippery and not recommended.   OH, a path to the glacier.  Well we just had to see how far the path would take us.  We followed along and met up with a young couple on their way back.  When we asked how far they had gone, they said to the bottom where the black stuff was on the glacier.  WOW!  We told them maybe we could have done that 30 years ago.  We bid them good-bye and continued on until we came to a split in the path.  Oh which way should we go?  Up or down?  We decided UP and followed along for a while.  UMMM, maybe we should have gone DOWN.  So back we went to the split and took the lower path.  Of course it was not all down, there were downs and ups and downs and ups…. scrambling over rocks at one point.  We got closer and closer until we were within 150 feet of the bottom of the glacier.  To actually get to the glacier would have meant climbing over large, loose, wet rocks, NO way!  We did a lot better that we thought we would be able to do, guess we are a little younger than we thought. 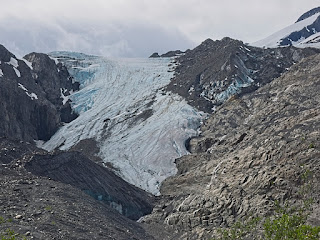 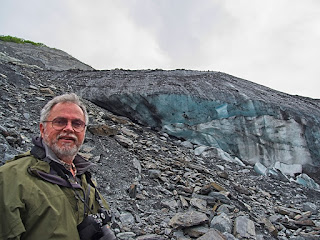 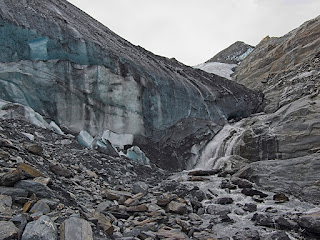 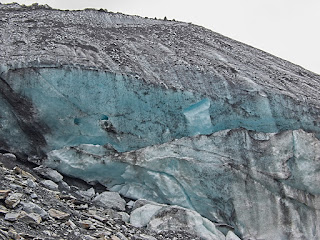 On our way back we stopped to see the old Railroad Tunnel of 1906. The tunnel was hand cut into the solid rock of Keystone Canyon but was never finished after a gun fight broke out over who owned it. 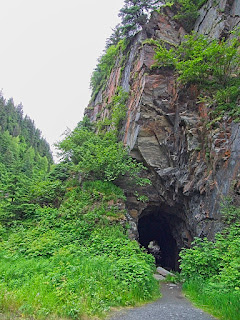 The last stop of the day was at The Solomon Gulch Fish Hatchery on the Dayville Road out of Valdez.  There is a creek along side of the hatchery that runs into the estuary and when the salmon are running is a good spot to see bears.  But none today.  The road dead ends at the entrance to the Alyeska Pipeline Terminal complex.  There is a small campground just before the end of the road, but we would not fit in those spots. 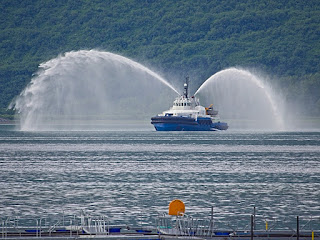 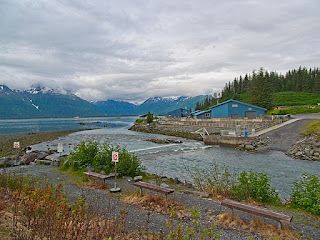 Wednesday was another day trip up the Richardson Highway this time to a little town of Chitina on Hwy 10, the Edgerton Highway.  The turn off for the Edgerton Highway is about 85 miles north of Valdez.  The first few miles are a very straight paved road, all downhill.  It looked like big long steps, down then flat, down then flat, over and over again with views of the Wrangell Mountains.  We stopped around mile 7 for lunch at Ken’s Bistro.  Cindy had the Wimpy Burger and Forest had the Lamb Gyro (both were very good) and then split a delicious Cinnamon Bun for dessert.  The Milepost Book we bought for our Alaska trip has info of things to see all along the highways in Alaska and it said to look for Tibetan yaks along this road.  Sure enough, there is the Circle F Ranch on the Egerton Highway and there in the pasture is a herd of yaks.  Cannot say we have seen yaks before but we did see them here. 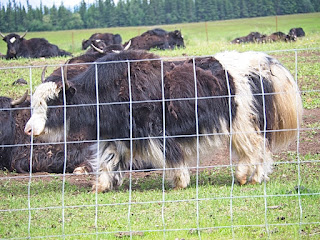 There is also a very small campground along Liberty Creek which has a nice waterfall, so we saw the Liberty Falls too.  Nothing like the Bridal Veil or Horsetail Falls, but a small waterfall none the less.

We continued on to the tiny town of Chitina where we saw homemade signs saying “SLOW DOWN”  “MOOSE EVERYWHERE”.  GREAT!!!  Moose everywhere, we were excited to slow down and see moose.  We did slow down to a crawl and looked everywhere, but no moose to be seen.

We reached the end of the paved road and continued another 16 miles on a chip seal road to the Kuskulana Bridge.  This bridge was built in 1910 as a Railroad Bridge and is now a one lane bridge for automobiles.  It is 775 feet long and 238 feet above the Kuskulana River.  It is only 14.5 feet wide, a 3-span steel truss railway bridge, which was rehabilitated with wood decking and guardrails.  Sadly the bridge was in the process of being inspected and our wait time to cross would be over an hour, both ways.  So we decided to turn around from here after hiking down to see the bridge from below.  Our original plans were to drive to the end of the 60 mile gravel road then walk across a footbridge to the town of Kennicott.  Then catch a shuttle for the 5 mile trip to McCarthy.  Not today, waiting for the bridge would have put us late driving back to Valdez. 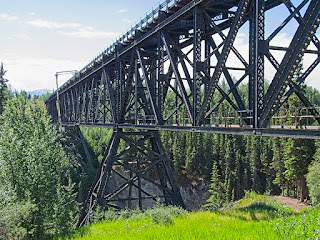 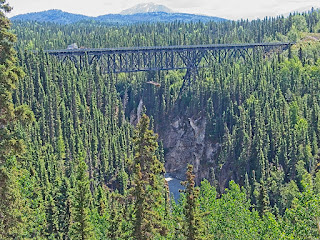 On our way back we stopped at the Copper River Bridge to watch the fishermen.  They were fishing for Pink and Silver Salmon using dip nets.  Not the kind of dip nets we were accustomed to seeing.  These nets were about 4 feet attached to a pole about 30 - 40 feet long.  The fishermen would stand on the bank of the river, some would walk in the river (think COLD water), and lower the net into the river, then they would walk along the bank as the current pushed the net down river lifting the net out of the water if they felt a fish hit the net or when they had traveled about 100 yards.  Doing this over and over.  When they caught a fish in the net, they would pull the net ashore and hit the fish on the head with a mallet or rock.  The fish was then deheaded, gutted and tail cut off to be brought home to clean later.  This was done on the edge of the river.  We watched as two teenagers tried to carry a 100 quart ice chest of fish about 50’ up the steep bank to their truck parked on the side of the road.  The ice chest must have weighed a hundred pounds or more.  Definitely a family affair, and only Alaska residents can get permits to dip net here. 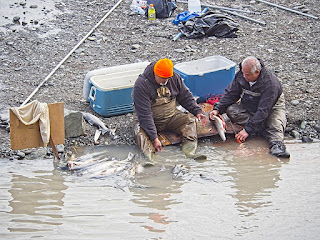 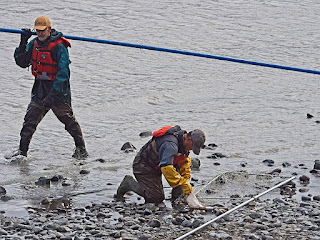 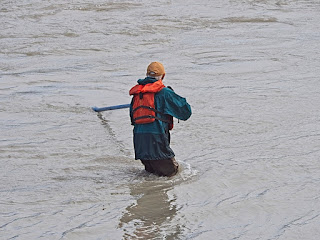 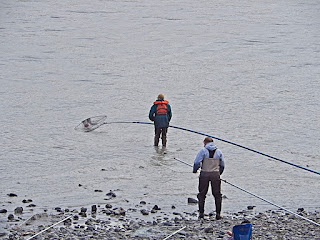 The highlight of our day was yet to come.  We stopped along the Copper River near the airport to see some fishwheels in motion.  These are built similar to a windmill and placed in the river.  As the current passes the fishwheel turns and captures fish in a basket which dumps into a trap as the wheel spins out of the water and over the top.  In order to use these fishwheels you must be an Alaskan and have a permit. 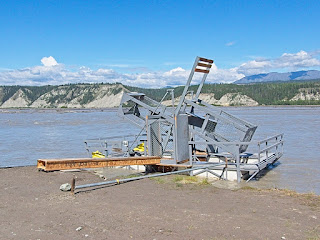 Our highlight of the day was meeting George and Maggie. He was the North Slope Borough Mayor for 12 years.  The North Slope Borough is made up of 8 villages with about 8,000 people.  He is now retired and was a Whaler on a Skin Boat.  They live in Barrow, Alaska.  We visited with them for quite a while.  She told us their grandfathers were also Whalers.  Her grandfather was from Liverpool and his was from Holland.  Both of their grandmothers were Eskimo.  They attended elementary school at home but all Eskimos attend high school near Sitka.  They both attended college (he for Aircraft Mechanics and she for Business) in California.  They were married in Los Angeles. 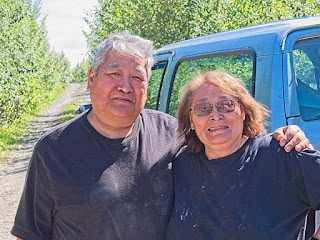 THIS is the Alaska we came to see.  Sure we will visit Anchorage and Fairbanks and other iconic sights, but we want to see the small towns and visit with the local Alaska peoples.
Posted by folivier at 10:25 AM