Another day in Moab

We slept in this morning, then went into town to walk around a bit.
After lunch we drove out to the Potash Road along the Colorado River.  I showed Cindy some Indian art I had seen yesterday.  Also a dinosaur track, you can see it on a slab from a distance.  Supposed to be an Allosaurus, but who knows?
Then we watched some rock climbers for a while.  The 2nd picture is the lead guy who free climbs carrying the rope up.  He uses temporary clips that he places every 10 feet or so until he gets to the top and hooks the rope to a permanent ring about 100 feet up.  If he falls he will drop twice the distance to the highest temporary clip.  After he rappels down then next climbers have a safety guy holding the rope so if they fall it's only a few feet.  Amazing to watch them climb, they have to have strong fingers to grab onto and wedge their fingers into the cracks.
After that we drove north along the Colorado River and then drove up the Onion Creek 4x4 road.  It was a pretty mild road but interesting because we drove through the creek 23 times!  Coming back I even got Cindy to drive through 1 creek!!
After that we stopped at Fisher Towers and did a short hike to a closer viewpoint.  These towers were featured in quite a few movies, Rio Grande with John Wayne, also John Carter of Mars.  The towers were in the background in the scene with the Indian chase scene.
We then drove to a spot on the river so I could get the last shot of the Fisher Towers with the La Sal mountains in the background and the reflection in the river.  I had to wade out into the river to get the shot.  Man that water was COLD! 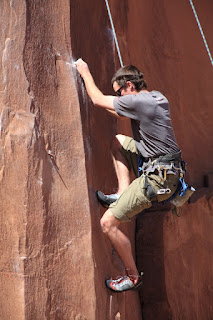 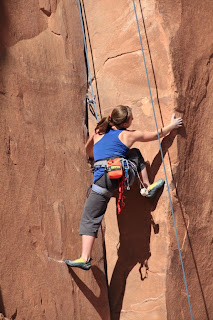 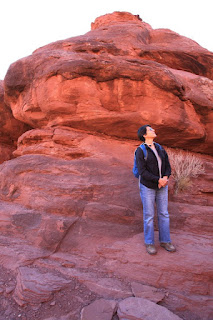 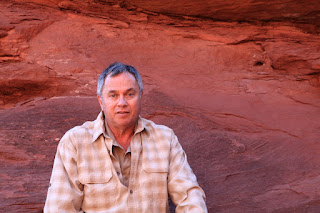 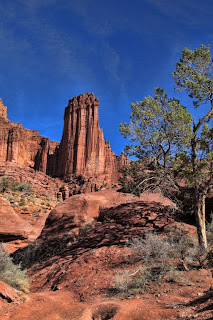 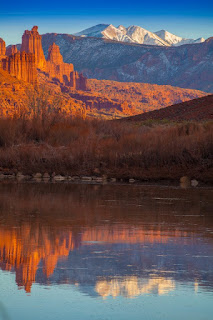